INFORMATION ABOUT THE REGION

The Chukotka Autonomous (until 1980 – National) Region – was formed on December 10, 1930. The status of an independent subject of the Federation has been in effect since June 17, 1992. The status was confirmed in 1993 by the decision of the Constitutional Court of the Russian Federation.

It is part of the Far Eastern Federal District. 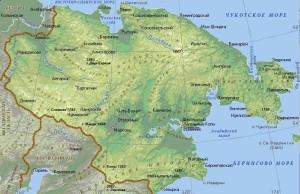 The administrative center is Anadyr. Other cities: Pevek, Bilibino.

The district occupies the territory of land between the lower reaches of the Kolyma in the west and the Dezhnev Cape in the Chukchi Peninsula, as well as the islands: Wrangel, Aion, Arakamchechen, Ratmanov, Geralda and others. On land, the region borders the Republic of Sakha (Yakutia), the Magadan Region and the Kamchatka Krai. From the state of the USA Alaska Chukotka is separated by the Bering Strait.

CHAO is located on the extreme north-eastern tip of the continent of Eurasia, crashing into a wedge between the Pacific and Arctic Oceans. Washed by the East Siberian, Chukchi and Bering seas.

The extreme southern point of Chukotka is Cape Rubicon (62° N); Northern - Cape Shelagsky (70° N); West - left bank of the lower reaches of the river Omolon (158° E); Eastern - Cape Dezhneva, which is also the eastern extremity of Russia and the whole of Eurasia (170° W).

Symbols of the Chukotka Autonomous Region

The flag of the Chukotka Autonomous Region was adopted on December 28, 1994. In the center of the white triangle is the color of the Russian flag in a yellow edging. The very triangle symbolically means Chukotka, its color - the Arctic. The sides of the triangle divide the blue flag field - the colors of the seas, which symbolizes the Arctic and Pacific oceans washing the territory of Chukotka. The white and blue colors of the flag also symbolize white and polar nights. The yellow circle around the Russian flag on a white triangle means that the inhabitants of Chukotka are the first in the Russian Federation to meet the sunrise. The yellow rim "Yarar" is a part of the national symbolism of the indigenous peoples of Chukotka. Yellow is also a symbol of gold, which is mined in Chukotka. 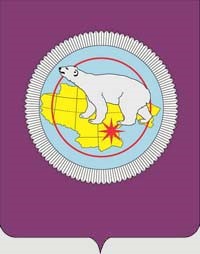 The emblem of the Chukotka Autonomous Region was adopted on November 27, 2000. The violet color of the heraldic shield means polar night. The polar bear is a traditional symbol of the region. The yellow color, in which the symbolic image of the territory of the district is colored, is a symbol of gold - the main wealth of Chukotka. The red star symbolizes the North Star. Eight of its equal rays symbolize the unity of the eight districts of the Autonomous Region with the administrative center - the city of Anadyr. The blue color of the circle reflects the expanses of two oceans - the Pacific and the Arctic, washing the Chukchi Peninsula. The red color of the ring indicates the special position of the region, which is the border area of the northeast of the Russian Federation. The rays around the whole image symbolize the northern lights and the white space of the Chukchi tundra in winter. The number of rays is 89 - by the number of regions of the Russian Federation.

The Region government is aimed at attracting Russian and foreign investment in industry and infrastructure development in general.

In the Chukotka Autonomous Region, a regulatory legal framework has been formed which is aimed at creating a favorable investment climate in the region. The current regulatory framework contains rules that ensure the protection of investors' rights, mechanisms for supporting investment activities and guarantees that the position of investors will not deteriorate.

Creation of favorable investment conditions is confirmed by positive dynamics in one of the most significant branches of the region's economy (mining of precious metals), the entry of Kinross Gold, Polymetal, Polyus Gold into Chukotka.

Provision of stocks of organizations conducting mining of alluvial deposits of ore, with the level of alluvial gold mining that has developed in recent years is 8-25 years. The known gold ore deposits (Kupol, Maiskoye, Valunistoe, Karalveem, Dvoinoye, Maple, Kekura) and promising ore areas (Vodorazdelnaya, Stadukhinskaya, Kanchalano-Amguemskaya, Uteveemskaya, Verkhne-Krichalskaya, Mangazeyskaya, Pepenveemskaya, Ergueemskaya and others) were transferred for use, in Undistributed fund remained in the main areas, characterized by a low degree of study.

For organizations operating coal deposits, according to the data of geological prospecting, the supply with reserves is 50-100 years.

The increase in the investment potential of the Region is connected with the large infrastructure projects of the government of the ChAO. This, above all, the construction and reconstruction of highways with access to the developed deposits of precious metals. The development of social infrastructure and the improvement of the quality of life has a positive impact on the personnel potential of the region.

The government of the Chukotka Autonomous Region invites the investment project "Development of the Chaun-Bilibino industrial hub", which includes:

Industrial development of deposits of precious (gold, silver) and non-ferrous metals (copper, molybdenum, tin and tungsten). The total resource of gold in these fields is about 950 tons, silver - more than 7 thousand tons, copper - 24 million tons, tin - 508 thousand tons. The project pursues geological exploration, the construction of mining and processing plants, construction of social infrastructure facilities, Energy facilities and roads. The forecast volume of production by 2020 will be: gold at least 30-32 tons, silver - 200-250 tons, copper, tin, molybdenum and tungsten-in the required volumes, according to the projected feasibility study of the field development. The main goal is to accelerate the development of the mining industry in the district, accordingly, a decrease in subsidies from the federal budget is planned, and new jobs will be created.

The forecast resources of platinum group metals in the territory of the district are located within the Anadyr-Koryak system, the metallogenic specialization of which is determined by gold, mercury, less often copper, chromite and tin-silver mineralization, as well as alluvial manifestations of gold and platinoids.

In recent years, within the limits of the Mainitsko-Khatyr platinum-bearing area, new data on the metallogenic potential and prospects of the territory for revealing the primary deposits of gold, platinum and chromite have been obtained as a result of advanced geochemical prospecting and prospecting, and their predictive estimate is given. Based on the latest data, promising metallogenic zones are identified - Alganskaya, Velikorechenskaya, Maynitskaya, Rytgylskaya, Alkatvaamskaya, Econai, which require more detailed study on the totality of geological, structural, geochemical and search characteristics.

In addition, the predicted resources of platinum group metals are estimated by category Р1 in the complex field of the Peschanka molybdenum-copper-porphyry formation in the following quantities: platinum 16.2 tons, palladium 125.5 tons, rhodium 17.6 tons.

There are no independent silver deposits on the territory of the Chukotka Autonomous Region, but there are prerequisites for the detection of predominantly silver objects. Silver is an associated component in the ores of the discovered gold and silver tin deposits. As of 01.01.2015 the balance reserves are 4.68 thousand tons.

Expediency of industrial development of silver-bearing deposits with balance reserves is determined by the economic value of the main minerals - gold and tin.